BOSTON, MA — First thing they teach you in journalism school is don’t write what you know. Go out into the great big world and find something new and interesting that you don’t know, that ideally no one knows. Discover it, figure it out, understand something about it, then explain it to other people in writing.
Do that once with anything like style, and congratulations, you’re a writer. Do that once on the topic of wine, and you’re a wine writer.

One of the main challenges of wine writing – as if there even are challenges and anyone anywhere cares about them – is resisting the urge to write about wine as a thing. It’s easy to do because wine is a thing, a wonderful thing, but the most interesting part of wine is not the concrete dimension, but the time churning experience of consuming a wine, having it be deliriously delicious for a moment and then gone forever.

I like the hands-on experience of schiste and loam as much as the next person – soils and weathers and growing conditions explain a lot – but as a wine reader, I want to know what it means more than what it is.

Limestone may well be soil composed of prehistoric sea shells and skeletons, so it’s high in calcium, which makes sense and is interesting on its own, but what’s that taste like in the glass? More importantly, do I like that flavor, and should I start asking for wines from high-calcium soil, or is asking that question going to be as epic a conversation killer as it seems destined to be?

Wine lovers rely on a lot of different sources to inform their wine selections: maybe your own taste or mood, often the people around you at any given table, sometimes a distant, accomplished expert. I like to watch people in tasting class start to connect with their own taste and mood, to see them realize they’re not wrong about Cabernet Sauvignon, they’re just Pinot Noir people, or vice versa. What I write about wine is what we teach about wine: what wine means, what it makes you think and feel, the story behind the story.

Translate the name of this wine into core English and it comes out 2014 Great Iron Castle “Pigeon Coop” Malbec, which would be an entirely unremarkable name if it was from some Australian or South African iconoclast winemaker. Instead, it merely specifies a particular vineyard – the one with the pigeon coop – where the grapes were grown.

Wines with this much Malbec in the blend are abundantly common in Argentina but not in France. In France, Malbec is a minor blending grape that makes a 2% – 5% appearance in Bordeaux blends, coming in a distant 5th place behind Cabernet Franc and Petit Verdot.

Thank you, Argentina, for changing our world view about what Malbec can be and how it can be made. The grape arrived in South America from France in the 1840s, but now the influence is flowing the other way. This Grand Ferrand Malbec is leaner and stonier than examples from Argentina, which makes it an especially ideal match with big red meats and aggressive cheese. 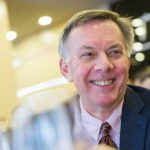 JONATHON ALSOP is founder & executive director of the Boston Wine School, author of The Wine Lover’s Devotional and In Vino Veritas, and a commentator for National Public Radio on WGBH | Boston Public Radio and Under The Radar. His new book Wine Life: A Collection Of Verses will be published in 2021.

The Truth About Wine